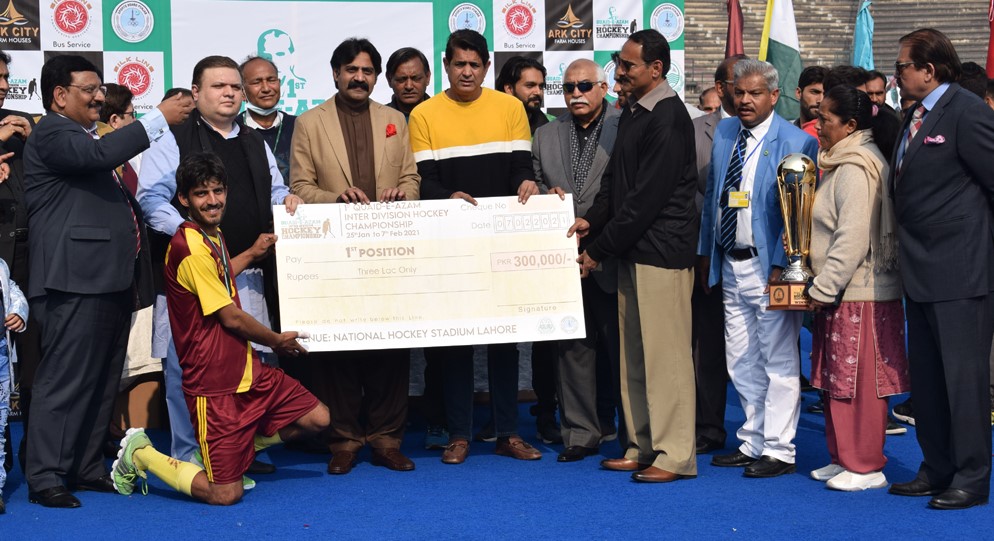 Faisalabad stunned Lahore by 4-0 in a high-profile final to clinch the title of First Quaid-e-Azam Inter-Division Hockey Championship 2021 at National Hockey Stadium on Tuesday. The third position went to Bahawalpur which defeated the strong Sargodha team in a nail-biter by a narrow margin of 1-0.

The final match was started aggressively by both the teams and attacked each other’s goalpost repeatedly but failed to score any goal during the first 19 minutes. However, Faisalabad’s Ghulam Mujtaba opened the scoring through a field goal in the 20th minute. Faisalabad’s forward M Sajid struck another field goal after just eight minutes gap to strengthen his team's position.

Lahore team who were looked off-colour throughout the game, tried their best to counter the attacking game of Faisalabad but they failed to do so mainly due to their weak ball control techniques. Lahore’s penalty corner department also badly failed to click during the title decider. They got as many as ten penalty corners during the match but failed to convert any of them.

In the 3rd/4th position match, Bahawalpur edged out strong Sargodha team by 1-0. Both the teams fought well to score any goal but they failed to do so until 59th minute when Bahawalpur’s Ali Raza (shirt number 8) netted the only goal of the match through a field effort.

Lahore division hockey team captain Hannan Shahid grabbed two cash prizes (Rs 25 thousand each) for being declared Best Player of the Tournament and the Scorer of Most Goals (11) during the tournament. Faisalabad’s Hamza Shahbaz was adjudged the Best Goalkeeper of the Championship and pocketed a cash prize of Rs 25 thousand. The honour of Man of the Final was gone to Faisalabad division hockey team captain Ali Raza.