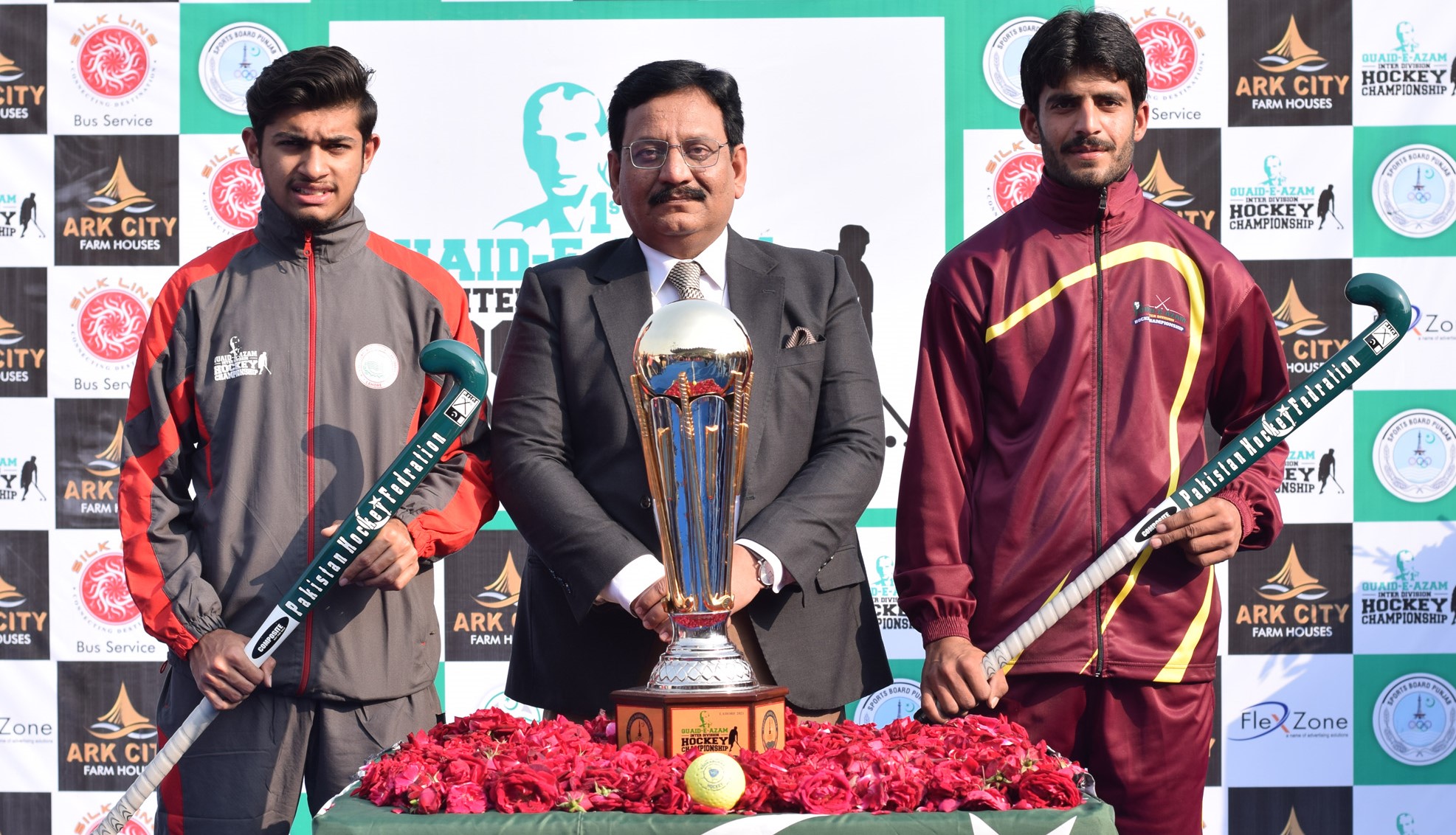 Glittering trophy of the first-ever Quaid-e-Azam Inter-division Hockey Championship was unveiled here at the National Hockey Stadium on Monday. Director General Sports Punjab Adnan Arshad Aulakh and captains of Lahore division Hanan Shahid and Faisalabad division Ali Raza unveiled the trophy of the championship, being held under the auspices of Sports Board Punjab.

Addressing the ceremony, Director General Sports Punjab Adnan Arshad Aulakh said that the inaugural Quaid-e-Azam Inter-Division Hockey Championship of Sports Board Punjab is successfully coming to an end. “The final of the championship will be held on Tuesday, February 9 at the National Hockey Stadium Lahore and it will be played between Lahore and Faisalabad divisions. Hockey is our national sport. We are taking all possible steps for its revival to the same level it used to be.

“This is our small effort which will be the first step towards its revival. We are hopeful of Pakistan gaining the lost glory in the coming days, weeks, months or years. The green crescent flag will be seen at the Victory Stand once again with these efforts,” he said and added that the Inter-Division Hockey Championship is from now on a permanent feature of the annual sports calendar of the Sports Board Punjab.

He further stated that the championship will be held every year to promote hockey. “We have built an academy and laid an astroturf for development of the sport. 25 astroturfs have been laid where there are facilities of international standard and all are working together for the revival of hockey. Next month we are also holding a women's hockey tournament.”

“Besides, we are planning holding a tournament between Lahore and Karachi. This series will be the best of 5,” revealed Director General Sports Punjab Adnan Arshad Aulakh.

He further added that the SBP has also approved a School of Medicine of Punjab in which full facilities will be provided for the injuries of the players. He thanked the Sports Board Punjab team and officials for their hard work and especially the media for its support and added that a program has been sent to the government to provide financial support to the players.

Lauding the media, he said that they gave the best coverage which made the first Quaid-e-Azam Inter Division Hockey Championship a very successful event. Lahore Division Hockey Team Captain Hanan Shahid while addressing said that all players are grateful to Sports Board Punjab for organizing this beautiful event. “It was a great opportunity for the players to showcase their skills and promised to give their best performance in the final.

Ali Raza, captain of Faisalabad division team, said that Director General Sports Punjab Adnan Arshad Aulakh decorated the event into a very beautiful hockey festival which has increased the enthusiasm of the players. “This event of Sports Board Punjab will always be remembered. We will enter the field with the spirit of victory in the final and will become the champion.”